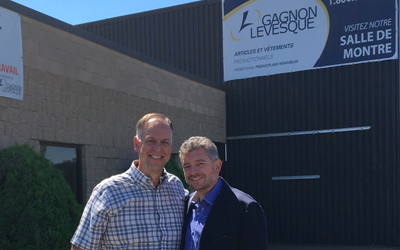 LONDON, ONT. March 14, 2019 Talbot Marketing Inc. a leading distributor of promotional advertising, corporate apparel and professional uniforms announced today that they have finalized the purchase of Gagnon Levesque of Laval Quebec. Steve Levschuk, President of Talbot Marketing said, “We are extremely pleased and excited with this new association with Gagnon Levesque. Gagnon Levesque is one of the premiere distributors in Canada and the leading distributor in Quebec. Alain Gravel and his team have built and grown a wonderful organization. An opportunity like this doesn’t come along that often. Both companies are a complete match organizationally and culturally.”

Gagnon Levesque is a Laval Quebec based company with a large customer base throughout the Province of Quebec. Gagnon Levesque specializes in providing organizations with promotional advertising, corporate/uniform apparel. Throughout their long history they have consistently increased their revenues by meeting and exceeding their customers’ expectations. Alain Gravel said, “With our great team we were able to build a successful company. With Gagnon Levesque’s history and vision it was a natural choice to merge our strengths.’’

Talbot Marketing is one of Canada’s largest providers of promotional advertising, business gifts and corporate/uniform apparel. Talbot has 157 Sales Partners that operate from coast to coast. Talbot has experienced exceptional growth over the past several years through alignment with new Sales Partners and acquisitions. Over the past several years, Talbot has been honoured with many accolades including; one of Canada’s Best Managed Companies, London Chamber of Commerce Business of the Year, Distributor of the Year, many Image Awards for work opposite their clients, Talbot Marketing was honoured as ASI’s 5th Best Place to Work in the Promotional Products Industry in North America.